MCI‘s Center for Social & Health Innovation initiated the project „Food Explorer Tyrol“. In this project, adolescents explored the food environments of their schools. They collected data on the food supply and came up with fresh ideas to improve their food environments.

In citizen science, lay volunteers take on the role of professional researchers. They develop research designs, collect data, or help to interpret data. In the project “Food Explorer Tirol”, students from eight schools in Tyrol investigated the food supply inside and outside their schools. As common in citizen science projects, the students engaged in real scientific inquiry.

The students used a digital data collection tool and shared pictures and textual descriptions of the food items which they identified inside and close by their schools. They rated each observation as “unhealthy”, “neither nor”, or “healthy”. A pretest and an ex-post screening of the collected items and categorizations indicated that the students are well equipped to make such distinctions. 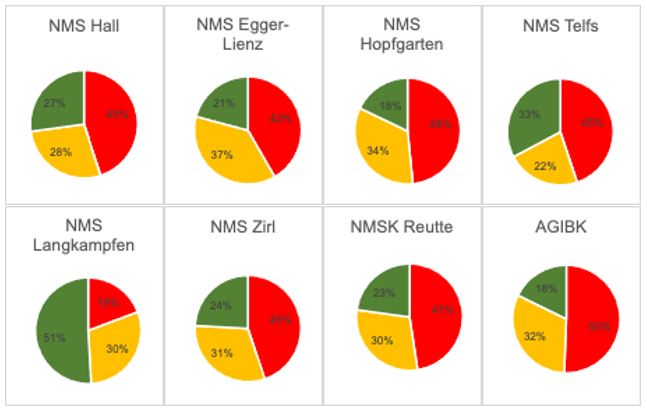 Figure: Student classification of the identified food items across the eight schools. Green = “healthy”, yellow = “neither nor”, red = “unhealthy”.

However, there was one outlier school in the project. The middle school in Langkampfen categorized only 19 percent of the identified food items as unhealthy, and a majority (51 percent) as “healthy”. “The reason for this might be that there are practically no commercial food suppliers operating in this area”, explains MCI researcher Emina Pejkovic, who was responsible for implementing the project.

Therefore, the students mostly identified food items which they brought from home, and these food items tend to be less processed than those from commercial suppliers. “Commercial convenience foods tend to contain too much added sugar, fat and salt. This is a way to enhance palatability and thus to increase profits”, says MCI research fellow Raffael Heiss, the PI of the project. According to him, food prepared at home tends to have a higher share of natural, minimally processed ingredients, such as whole fruits and vegetables, legumes, or bread made from whole grain.

Based on the experience of the data collection, the students developed new ideas about how to change their school food environments. The students came up with innovative ideas, such as a vending machine, which is filled with healthy snacks. They conceptualized a health school canteen with a digital payment system, through which parents could transfer money to their children. Furthermore, they came up with healthy menus, which could make healthy eating more “fun” and designed cool seating areas, which may incentivize social exchange while eating.

The future of schools

While the students are well aware of the problem of unhealthy food environments, there is still a lack of awareness on the level of political decision-making. According to Raffael Heiss, there is much potential to be unleashed: “It would be important to involve students in the development of new solutions and to think about how a healthy food supply can speak to their individual and social needs. Only then, they may also embrace new healthy food offers.”

In Citizen Science, volunteers (e.g. school students) take on the roles of professional researchers. They support different steps of the research process, such as the development of a study design, the collection of data, or the interpretation of outcomes. The citizen science project „Food Explorer Tirol“ was designed as a pilot project and was funded by the Tiroler Wissenschatsförderung (TWF). Eight schools participated in the project: Akademisches Gymnasium Innsbruck (AGI), MS Egger Lienz, MS Hopfgarten, MS Langkampfen, MS Schulzentrum Hall in Tirol, MS Telfs, and MSK Reutte.